Many people, parents and kids, can relate to this poem.

No "News" is Good News

There's rarely any good news on 'the News' because, frankly, bad news sells better. Television and radio news shows are productions, just like "Survivor" or "The Apprentice". And just like everything else on the air, they need ratings to stay afloat. Ratings = Commercials = Money.

And to get those all-important ratings, they need to keep people interested. Viewers, by and large, don't really care if the space shuttle launch went well, or if the Pandas at the zoo are expecting a baby, or if a local man won the lottery – they want stories that make them feel better about their own lives.

They want to see other people fail, so they don't feel like failures themselves.

If only the ultra-negative world would just back off, they say, they'd be rich and famous too. If the world were a more positive place, filled with hope and joy, then we could all 'get ahead'.

But, in typical human fashion, the average viewer has no real interest in actually doing anything about any of these things. They just want more material to complain about during their lunch breaks tomorrow. They say they want the world to be happier, but all they really want to do is whine and spread the misery, hoping for some super-messiah to come along and save them – just as long as they don't have to lift a finger.

Viewers don't want to make their own lives better, they want to be elevated to an exalted status without actually doing anything. The world owes them, after all, and someday everyone will see how great people they are for being "normal".

All hail mediocrity, be a simple kind of man, the meek shall inherit the Earth, and all that. Don't strive to be great – just vegetate. You can't be a failure if you fail to try, right?

Not everyone is so lazy, so selfish, and so callous as all that – but the majority are. And that's who 'the News' caters to. They are in business to make money, above all else, and misery sells. It is, after all, what people want most in their lives. 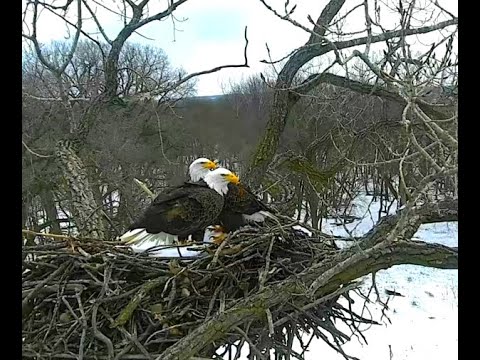 Over a million people a year have tuned into the reality shows being produced at the Alcoa Eagle Cam in Davenport, Iowa, and Eagle Cam in Decorah, Iowa, for the last two early springs. Avid fans have kept a running dialogue about sightings of couple copulation, egg laying, eaglet hatching and fledgling flights. It was previously reported that the Alcoa Eagles of Davenport were expecting a St. Patrick's Day delivery, and they are only three days behind schedule, but we all know the first one can come any time.

Around 11 this morning, the first baby eaglet hatched at the Alcoa Eagle Cam in Davenport. Although eagle egg hatching is not an exact science, eggs are predicted to hatch in 35 days after they are laid. Based on last year's information I used a calendar to compute that St. Patrick's Day would be the first possible day the first egg might hatch based on that 35-day bit of information. However, based on the number of days it took Liberty and Justice to incubate their first egg last year, I surmised it most likely would arrive later, and possibly around March 21.

As I said, it isn't an exact science, and the hatching began for excited viewers on Monday morning, March 19. It was a long vigil as spectators waited for the cracked egg to be totally breached by the emerging fluffy little grey eaglet. The first sighting this morning was actually of a curled up wet, scrawny little specimen who didn't look strong enough to sustain life. However, the little guy or gal quickly dried out, turning into an adorable ball of grey, downy fluff with a tiny yellow beak that very much resembled Mommy and Daddy's.

Baby eaglet No. 1 has officially been named after the god of Thunder, Thor. With five more eggs to hatch, I'll cross my fingers you're able to catch at least one of them. Good luck with your Eagle watching. Updates to follow as news of the next hatchings breaks.

Liberty and Justice had egg number 2 hatch at the Alcoa Davenport, IA web cam. As previously noted, eaglet hatching is not an exact science and even at 6:20 this morning a hole could be seen in one of the two remaining eggs. Liberty fed her first hatchling a breakfast of leftover raw fish. The feeding took approximately ten minutes, and then Thor snuggled down into the nest, seemingly sated. Liberty pulled loose straw around baby Thor, and settled atop her brood to wait for the arrival of baby eaglet number 2 who was not long in coming. Now feeding time that took ten …