Multiple Births in the News 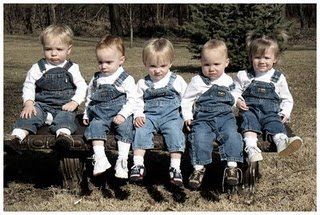 Multiple births have always been fascinating to many people. It's not every day you see twins, triplets, quadruplets or quintuplets. They are special and so are the parents that raise them.

Twins Born to Multi Race Couple, One of Each Color

CBS reported the birth of a rare set of twins, born in Great Brittan recently. If that isn't odd enough, the twins have bi-racial parents. The twins are not the same color, one twin is white while the other twin is black. That has to be a one in a million chance birth. But wait, this couple also has a set of seven-year-old twin girls who are also two different colors, one black and one white. What are the chances of this happening twice to the same parents?

The new set of twin girls was born prematurely last month. They have now been released from the hospital and are doing well. The family is now seeing double x 2 around the house!

Mom in Detroit Gives Birth to Twins on Different Days, Months and Years!

New Year's Eve brought the birth of Tangernika Woods' first twin, but twin number 2 was stubborn enough to hold out for 26 more minutes making his arrival into the world on a different day, a different month and a different year.

Woods gave birth to two boys, weighing 5 lbs. and 7 ozs., and 5 lbs. 15 ozs. Both babies were healthy and reported to be doing well.

A new set of quintuplets were born Saturday, December 27, 2008 on Staten Island, New York to new parents, Jamie and Kevin Ferrante. They have suddenly gone from having no children to a full house with 5 babies!

The babies were all born within 6 minutes of each other via Caesarean Section. There were 4 girls and 1 boy ranging in weight from 1 lb., 8 ozs. to 2 lbs., 4 ozs. Mrs. Ferrante was 27 weeks into her pregnancy when she gave birth. She had been hospitalized early in December to prevent early delivery and complications. The babies are expected to go home from the hospital in late February or March of 2009.