News and Nostalgia: The New Newseum Promises to Be a "First Amendment Beacon" 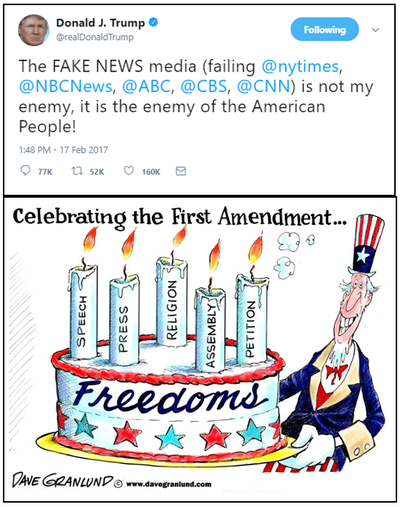 Fun, "inspiring," and "interactive" are the three words Cathy Trost, Director of Exhibit Development for Washington, D.C.'s future Newseum uses to describe the museum that is sure to become "a First Amendment beacon" with its comprehensive exhibit on the Five Freedoms. The world's only museum devoted exclusively to news and media is moving from Arlington, Virginia to a prime location on Pennsylvania Avenue in Washington, D.C. next to the Canadian Embassy with plans to open on October 15, 2007. Boasting 14 major galleries, 12 additional exhibit areas, fifteen theaters, two state-of-the-art television studios, a shop, and a restaurant, the Newseum seeks to provide a thorough, investigative presentation of the history and evolution of news media that will appeal to a larger and more diverse audience than its Arlington location attracted.

Cox Enterprises and the James M. Cox Foundation of Atlanta announced their full sponsorship of the First Amendment exhibit on March 27 of this year with a pledge of $6 million. In response to the pledge, Newseum CEO Charles L. Overby thanked Cox , stressing that, "The First Amendment experience is at the core of the Newseum mission," according to a press release on the Newseum's website.

Other Newseum exhibits will focus on the media's response to the tragedies of September 11; the dangers of dateline reporting; the expansion of global journalism; the evolution of anchor news; information about students' free speech and press rights; and the transformation of news and development on Pennsylvania Avenue. Trost mentions that she is especially excited about the exhibit devoted to comic strips, joking "there's hardly anything you can do to cause more commotion from newspaper readers than change a comic."

While the quality of the exhibits has yet to be determined, the sheer amount of content the museum will tentatively show is in itself impressive. The Newseum exhibit development team plans to display over 100, 000 words in gallery scripts; 1, 800 illustrations, cartoons, photographs, and other images; 6, 180 artifacts (the oldest one being a 2, 575 year-old statue from ancient Egypt); and 1, 063 press passes.

One of the reasons why the Freedom Forum, the organization in charge of the Newseum, decided to relocate the Newseum was because it was too small to house its huge collection of journalism memorabilia. The Freedom Forum also cites the Arlington location's inconvenient accessibility as an incentive to move the museum. With its location in the nation's capital, the new Newseum is bound to snag more visitors than the old one did. Trost says that the "experience
Many members of the Arlington community, however, are disappointed that the Newseum is leaving. It once was a popular destination for middle and high school journalism students seeking to augment their knowledge in the field. Bernie Thrasher, 17, a junior at Arlington's Yorktown High School interested in pursuing a career in media states, "I went to the old Newseum as a kid and it was really cool." After a brief pause, he wistfully adds, "So I hope the new Newseum is cool."

With a $435 million total investment by the Freedom Forum in the Newseum building project, the Freedom Forum hopes that younger visitors like Bernie will find the museum very "cool," too. To the Freedom Forum and the entire newspaper industry's chagrin, too many members of the 25 and under crowd dismiss newspapers in favor of Internet, claiming that newspaper stands are inconvenient, subscriptions are too expensive, and that Internet is far more accessible than any fifty-cent daily.

Philip Burnam's September 1996 article in the Columbia Journalism Review predicted even then that "In fact, the Newseum would like to become to its peers what USA TODAY has been to traditional dailies: a play for youth market share, a warning that not everyone wants to turn to an inside page to follow a story." The Freedom Forum is an offshoot of Gannett Co., the owner of eleven radio stations, fifteen TV stations, and ninety-two daily newspapers, including USA TODAY. Both the USA TODAY and the Freedom Forum have teamed up to unveil exactly what it is that youth desire in news. More often than not, the answer seems to be something that is interactive and Internet-based.

Beth England, 17, another student at Arlington's Yorktown High, admits, "My primary source for news is the Internet and television. I do think that itÃƒƒÃ'Â¢€™s a bit sad [that my generation depends] more on TV for news than newspapers because newspapers bring an educational aspect not given in TV."

So in an effort to attract younger visitors, the Newseum has also designed an interactive website, www.newseum.org, that features video clips, a wide collection of photographs, easy-to-read press releases, and a list of resources for students who want to learn more about journalism. The Newseum also includes a 4-D theater experience about journalism tycoons Nelly Bly and Ed Murrow, with special effects like seats that jiggle.

But there are certainly teenagers who look forward to more than jumping into a jiggling seat when they visit the Newseum in the fall. Students who still enjoy reading the paper every day will delight in viewing the Newseum's stock of historical front pages, headlines, and antiquated photographs.

David Fuchs, 16, also a student at Yorktown, believes what cynics describe as the 'death of newspapers' is not only sad, but also an inevitable digression, "caused by the intractability of the mass media per se to adapt to capture a demographic largely influenced by new media and the web." He is hesitant to rely on television and the Internet because he prefers to "use his head", as he puts it. His primary source for news is The Washington Post, so he, like other Americans whose favorite newspaper is not USA TODAY, is curious about how the Newseum's exhibit visual and textual quality will ultimately look and read.

But Trost assures that the cost of admission to the Newseum will "be worth the price."